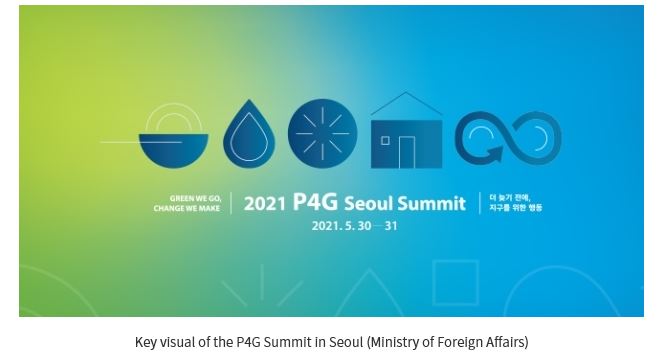 The second P4G summit, originally planned for last year but delayed due to the COVID-19 pandemic, will kick off virtually on Sunday for a two-day run in Seoul. It is the first-ever multilateral conference on the environment hosted by the Korean government.

P4G, which stands for “Partnering for Green Growth and the Global Goals 2030,” is a global initiative that seek solutions for climate action and green economic growth through public-private partnerships and deliver on the UN Sustainable Development Goals and the Paris Agreement. The forum involves 12 countries, including South Korea, Denmark, South Africa, Indonesia and Mexico, as well as international organizations and private firms. The inaugural summit was held in Denmark in 2018.

This year’s summit, under the theme “Inclusive Green Recovery Towards Carbon Neutrality,” consists of five thematic sessions on water, food and agriculture, energy, cities and circular economy, and 10 special sessions on such issues as climate change response, inclusive green growth and sustainable development.

To mark the end of the summit, President Moon Jae-in and other leaders will adopt the Seoul Declaration, which will highlight green recovery from the COVID-19 pandemic and set out goals and commitment in response to climate change.

A total of around 60 head of states and leaders of international organizations are expected to attend the event. US President Joe Biden is also expected to take part virtually from Washington.

Moon will declare the opening of the summit on Sunday and also chair a leader’s session on carbon neutrality on Monday.

With the upcoming summit, South Korea hopes to show its leadership and commitment in addressing climate change on the international stage, especially at a critical time when there is growing call for a sustainable, green recovery from the COVID-19 pandemic.

The upcoming P4G session is also set to pave the way for another major summit in November, the 26th UN Climate Change Conference of the Parties to be held in Glasgow, the UK. At the COP26, the 195 countries that signed the Paris Agreement will come together to review and report back on their progress on the commitments made under the accord. Adopted in 2015, the Paris Agreement set out an ambitious goal of limiting the global temperature rise at 1.5 degrees Celsisus or below 2 degrees Celsius by the end of the century.

“Though the summit, the Korean government will show the global community its strong commitment to combatting climate change, while promoting international cooperation ahead of the upcoming COP26,” said Yoo Yeon-chul, the executive director of the 2021 P4G Seoul Summit Preparatory Office.

Meanwhile, President Moon is set to hold summit talks with Prime Minister Mette Frederiksen of Denmark via video link just before the P4G session, to discuss cooperation for the success of the P4G summit, as well as other bilateral issues.