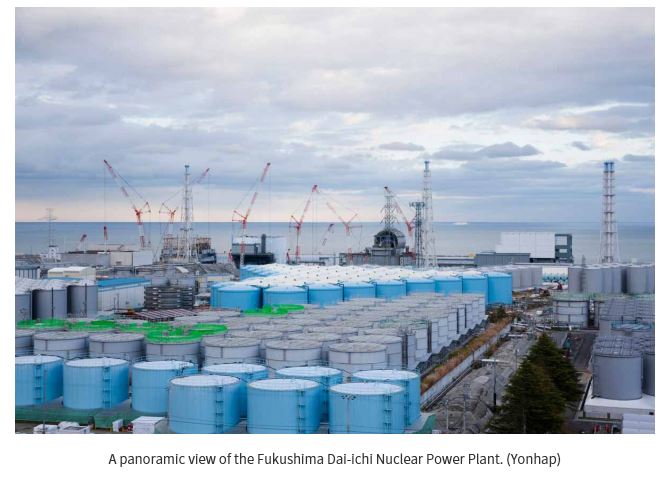 Japan’s planned release of contaminated water from the wrecked Fukushima nuclear plant will play havoc with human health and is more hazardous than that of Wolseong nuclear plant’s in 2016, experts say.

Japan announced last week it would discharge more than 1.25 million metric tons of contaminated water from the nuclear power plant into the Pacific Ocean, arguing the radioactive water will not pose a threat to human health.

However, Korean experts warn high-risk radioactive materials not properly filtered and discharged into the sea could be hazardous to those living in Korea and its neighboring China.

According to last year’s data released by the Tokyo Electric Power Company, only 30 percent of the 1.25 million tons of contaminated water treated with Advanced Liquid Processing System, or ALPS -- that cleans up radioactive contamination -- passed safety standards.

In the remaining 70 percent, high-risk radioactive materials such as cesium-137 and strontium-90, were found. Strontium-90 increases the risk of developing leukemia and bone cancer, according to a report by the Korea Energy Information Culture Agency, a government-funded think tank. Tritium, another radioactive material, cannot be removed by ALPS.

“When radioactive materials, such as cesium or tritium, flow into the ocean, they are absorbed into living things, mainly plankton. And through the food chain, radioactive materials accumulate in bigger fishes who eat lots of plankton or smaller fishes,” said Choi Yoon, a professor at Kunsan National University.

“Through the sea current, it can affect fishes near the Korean Peninsula, East Asia and even the entire world although the degree of dilution may vary. People who eat the fish with a high concentration of radioactive materials have a chance of having a deformed child,” he said.

Chang Mari, a climate and energy campaigner at Greenpeace, said that countries that operate nuclear power plants inevitably release radioactive materials into the ocean or the atmosphere.

In South Korea, tritium was detected in the bodies of 40 residents, including a 5-year-old child, living near the Wolseong Nuclear Power Plant in Gyeongju, North Gyeongsang Province in 2016.

“However, the radioactive materials released by the destroyed nuclear plant like the Fukushima one, cannot be compared to levels of tritium at Wolseong Nuclear Power Plant, which inevitably comes as a by-product of electricity production,” Chang said. An earthquake and tsunami in 2011 damaged reactors and caused hydrogen explosions at the Fukushima plant.

“More than 200 kinds of artificial radiation are emitted from nuclear power plants in accidents like Japan’s. These are radioactive materials produced only by nuclear fission,” she said.

Following the news on Japan’s decision, local fishermen are growing increasingly concerned about public fear over whether the seafood will be safe to eat.

Thousands of fishermen across the country staged protests, condemning Japan’s decision to release contaminated water from the plant.

“Even if contaminated water does not flow directly into Korean waters, our fisheries industry is likely to suffer devastating damage due to public concerns over the possibility of radioactive contamination of fisheries products,” fishermen in South Jeolla Province said in a joint statement.

They urged the Japanese government to immediately withdraw its decision to release contaminated water and called on the Korean government to ban all imports of Japanese fisheries products until the withdrawal.

Campaigner Chang said their worries were not overblown.

Back in 2013, when radioactive water leaked from a storage tank at Japan’s Fukushima plant, local consumption of fisheries products slumped 40 percent in traditional markets and 20 percent in large retail stores, according to the Ministry of Oceans and Fisheries.

The government too has pushed back against the release, which would set to begin in 2023 in gradual stages.

“We should clearly beware and avoid the release because we can’t guarantee the safety. The government’s basic stance is that the contaminated water should not be released in the ocean,” said Kang Jung-koo from the Ministry of Oceans and Fisheries’ marine environmental policy division.

However, if Japan pushes ahead with the plan despite strong opposition, Kang said, “Japan should disclose its standard and procedures transparently to the extent that the international community can accept and verify. The International Atomic Energy Agency should also be involved in managing whether the procedure is well followed.”

On Tuesday, Korean nuclear experts demanded the Japanese government disclose information on contaminated water at the Fukushima plant in a transparent manner at a meeting hosted by the Science Ministry.

“There were times when the Advanced Liquid Processing System did not work properly. Some contaminated water storage tanks have found nuclide in concentrations 5 to 100 times higher than the legal limit,” said Song Jin-ho, a researcher at the Korea Atomic Energy Research Institute.

He demanded the Japanese government conduct a full investigation of tanks containing about 1.26 million tons of contaminated water.

Seo Kyung-seok, director of environmental and disaster evaluation research at KAERI, said, “Japan said it purified contaminated water from nuclear power plants with ALPS, but the data is unreliable. (The Korean) government needs to get more accurate information (from the Japanese government) so that we can estimate the domestic impact.”