The Korea Herald is publishing a series of interviews with executives of South Korea’s leading corporations on their response to environmental, social and corporate governance, or ESG, issues, which have become central factors globally in measuring the sustainability of an investment or business decision. -- Ed. 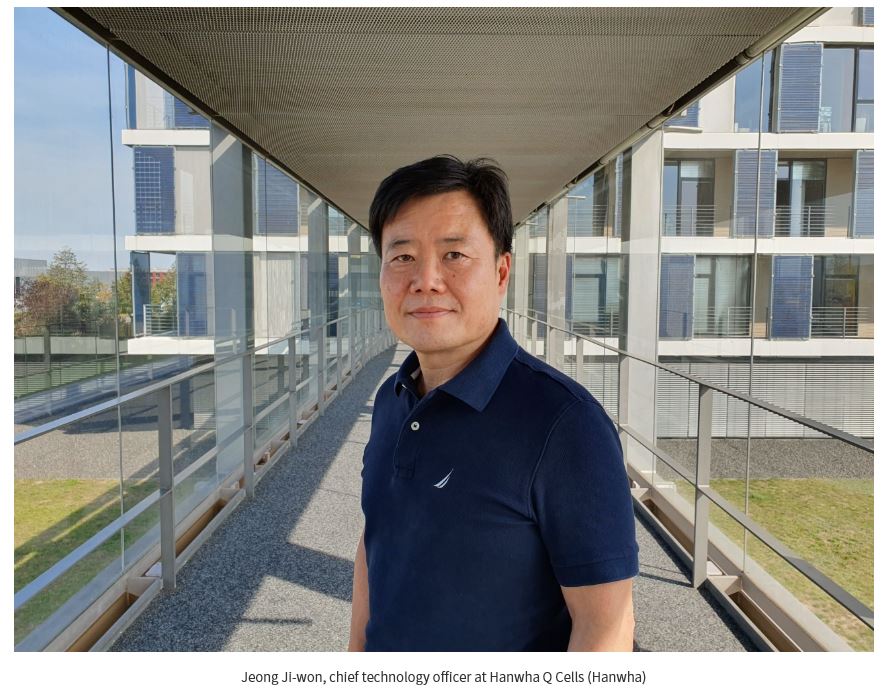 Though expensive and difficult to make, green hydrogen is the call of the times, says Jeong Ji-won, chief technology officer at Hanwha Q Cells, a solar-to-hydrogen unit of Hanwha Group.

“Humanity has made more progress in the last century than in thousands of years combined, but the next 100, 200 years can’t be developed like right now. It’s our mission to lay a foundation where humanity can seek a sustainable growth at the current pace without having to slow down,” the CTO said.

To lead the way, Hanwha Group has embarked on a journey others have not dared to follow -- green hydrogen.

Although hydrogen itself is colorless, the industry has come up with color descriptors to differentiate the source of H2. Green hydrogen is derived from water, unlike the blue or grey hydrogen extracted from fossil fuels such as natural gas.

Produced by breaking water into oxygen and hydrogen with electricity generated 100 percent by renewables such as solar power, green hydrogen is much more expensive than other forms of hydrogen.

The price, however, won’t be an issue, as long as there are customers willing to pay extra – the green premium, Jeong said.

“The European Union has recently decided to prioritize the development of green hydrogen based on solar and wind power and excluded grey hydrogen from its strategy. Also, Germany has allocated a hydrogen promotion budget worth 9 billion euros ($10.9 billion) to establish 5-gigawatt electrolysis facility -- which splits water into oxygen and hydrogen -- by 2030 and another one by 2040,” the executive explained.

Starting next year, South Korea will obligate power producers to generate a certain amount of their electricity using “clean hydrogen,” though a definition of clean hydrogen has yet to be decided.

Even without governmental support, green hydrogen will eventually become cost-effective enough to survive in the future, as renewable energy is getting cheaper and cheaper, he stressed.

According to studies from Hydrogen Council and McKinsey, the price of green hydrogen, which stands roughly at $6 per kilogram today, could drop to about $1-1.5/kg in optimal locations, and roughly $2-3/kg under average locations by 2030, as electricity generated by renewables is getting cheaper and cheaper. This means that green hydrogen could be cheaper than grey hydrogen, which on average costs $1.5/kg.

The price of green hydrogen can be brought down in two major ways -- develop more energy-efficient equipment to split the water or generate electricity as cheaply as possible with highly efficient solar panels. Hanwha is making progress on both ends.

“Anoin exchange membrane electrolysis is as efficient as PEM electrolysis and as cost-efficient as alkaline water electrolysis, but hasn’t been commercialized yet because there is no durable material to enable the technology. We’re working with research institutions and universities to secure source technologies,” Jeong said.

At the same time, based on its expertise as the world’s No. 6 solar panel manufacturer by shipment last year, Hanwha plans to mass produce next-generation “tandem” solar cells by 2023.

Tandem solar cell is a hybrid product of a conventional solar cell and the next-generation solar cell made of easily synthetized material called perovskite.

Perovskite solar cells absorb a shorter wavelength of blue light, whereas traditional silicon-based cells absorb a longer wavelength of red light. This difference in absorption depth allows tandem cells to maximize its efficiency rate. In theory, the maximum efficiency rate of silicon-based solar cells is 29 percent, while tandem cells can achieve up to 44 percent.

In addition to solar power, Hanwha aims to use wind power for its hydrogen production.

“Next month, Hanwha will launch a feasibility study in Pyeongchang, Gangwon Province, to generate electricity with a wind turbine and produce green hydrogen,” the CTO said.

Set for commercial operation in the second half of next year, the 30-billion-won ($26.7 million) project will produce 290 metric tons of green hydrogen annually, which would be enough to charge 130 units of Nexo -- Hyundai Motor’s hydrogen fuel cell powered SUV -- every day.

However, what sets Hanwha apart from other conglomerates such as SK and Posco -- who are also pursuing green hydrogen business -- is that Hanwha is the only one with experience in the virtual power plant and dispersed generation systems vital for Korea’s genuine green transition.

By 2034, renewable energy will take up nearly 42 percent of Korea’s power generation capacity. By 2040, the country will source 30 percent of its electricity supply from small-scale power generation sources such as solar farms spread across the mountains in rural areas.

Hanwha, which acquired US energy software firm Geli last August, has the expertise to integrate these dispersed power generation sources and operate them as a single virtual power plant. Geli utilizes artificial intelligence-based algorithms to optimize and balance electricity supply.

“The current centralized grid system is and always will be susceptible to the intermittency and instability of renewable energy. Hanwha’s years of experience accumulated overseas will be pivotal in tackling the issue and accelerate Korea’s green transition,” the CTO said.