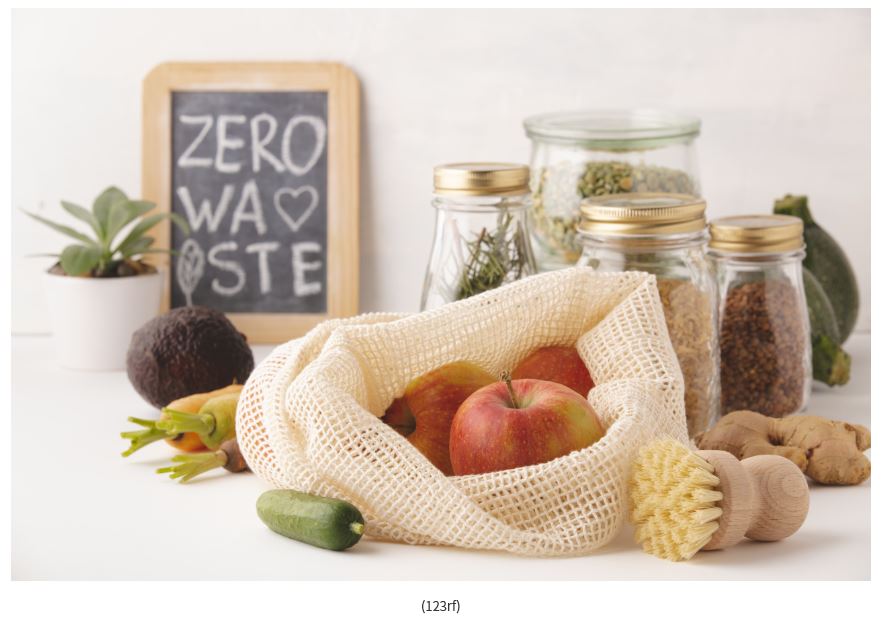 For someone who is not familiar with the term “zero waste,” it might seem like simply creating no waste. But there is a whole lot more to it.

To establish guiding principles, the Zero Waste International Alliance defines it as “the conservation of all resources by means of responsible production, consumption, reuse, and recovery of products, packaging, and materials without burning and with no discharges to land, water, or air that threaten the environment or human health.”

The zero-waste movement has garnered increasing attention in Korea over the past few years.

On Google, the country’s search interest for zero waste shot up by 100 percent between May 23-26, compared to five years ago, according to Google Trends. The company measures search interest on a scale of 0-100 based on the number of real-time searches within a certain time frame. Last week, it hit the max level at 100, data showed. Naver DataLab showed that Monday’s search rate for the eco-friendly movement jumped by over 300 percent from a year ago.

The rising popularity of zero waste came as the country witnessed mounting levels of garbage during the COVID-19 pandemic. The amount of plastic waste generated in the first half of last year averaged 848 metric tons a day, up 15.6 percent from the same period in 2019, according to the Environment Ministry.

The growing amount of waste in Korea, however, is nothing new. The country had the third largest annual per capita plastic waste generation in the world in 2016, according to a research article published in the journal of Science Advances.

The study, which uses the waste generation and characterization data reported by the World Bank for 217 countries, shows that each Korean generated an average of 88 kilograms of plastic waste a year, following the US’ 105 kg and the UK’s 99 kg.

Korea produced 4.51 million tons of plastic waste in 2016, taking up an alarming 24.3 percent of all waste. It was the highest proportion among the top 20 countries with the most waste generation.

While the government and corporates have come up with their own eco-friendly ways to “go green” by implementing pro-environment policies and producing more reusable items, it has been individuals and civic groups spearheading the effort to promote and practice the zero-waste movement in everyday life.

The Korea Zero Waste Movement Network has set out to combat the growing trash problem since its establishment in 1997 through numerous civic activities.

“Zero waste cannot be achieved by individuals or institutions alone. Everyone has to do it together and each player has a clear role,” said Kim Mi-hwa, president of the Korea Zero Waste Movement Network. “Groups like us urge the government to strengthen waste reducing or recycling policies. We do the same for companies.”

As the name of the organization suggests, the group carries out over 300 learning courses and campaigns on the pro-environment movement across the country annually. In collaboration with 176 environmental and customer rights organizations, the group has also set up locally customized zero-waste development models for 76 regions nationwide.

“Consumers have to change. If good companies zealously create (environmentally friendly) products but no one uses them, (the efforts) would be in vain. Even if we buy and use them but do not separately throw them away, it would mean nothing,” Kim said. “I think purchasing products with simplified packaging or less packaging materials is a consumer’s duty and responsibility. I hope we can all be wise consumers.”

In regards to the zero-waste movement gaining more thrust as of late, Kim told The Korea Herald that they, like many other environmental groups, have been focusing on it from day one.

“We are just now getting used to the term ‘zero waste.’ I have been carrying out the movement since 2000. It took more than 20 years,” she said. “In other words, our 20 years of continuous work are finally seeing the light.”

No packaging, no problem

As the country’s brimming landfills continue to pile up by the year, more refill stations -- stores where customers bring their own containers to purchase products being sold without packaging -- have opened doors to meet the needs of those hoping to do something for the environment.

“We thought if there was a refill (station) where consumers brought their own containers and used them to take products, it would decrease the amount of container waste and if there was no packaging from production, it would cut down the amount of packaging waste,” said Lee Ju-eun, a co-representative of refill station Almang Market.

Almang Market, located in western Seoul, began operation in June last year and sells detergent and cosmetics. The weight of each product determines the price.

“We accept trash that are difficult to be recycled. There was a flight attendant who knew about this and collected bottle caps from the airplane to bring them to the store. That was a memorable moment,” Lee said.

The refill station also offers hands-on experience workshops, such as shopping without packaging in nearby Mangwon market and making shampoo and conditioner bars without plastic.

“I think convenience is the biggest obstacle. With strong service mindset, our country is overflowing with disposable containers and goods that are being thrown away,” Lee said. “We can start by putting what we eat into our own containers. Gradually, we can decrease the amount of waste generated from disposable packaging.”

While civic groups and refill shops have taken proactive steps to advocate the zero-waste movement, social media has emerged as a platform to share ideas and support the eco-friendly practice.

Among the countless eco-conscious YouTube channels is one run by “ordinary mother Jin,” who prefers to use the moniker as she describes herself as an ordinary mother with two sons, aged 5 and 9.

“I used to buy mostly cheap stuff. But low-priced goods did not take environmental cost into calculation. I realized that it would cost much more in the end,” she said.

With 140,000 subscribers, the YouTuber shares videos from everyday life to record her journey to minimalism while giving useful tips on how to practice zero waste, such as using baking soda to clean oil bottles and making reusable beeswax wraps that can substitute for cling film.

“I began with the easiest thing I could do. It was turning to environmentally friendly products when it was time to replace things. Changing habits takes effort, but changing goods is not difficult,” she told The Korea Herald.

“For example, replacing plastic toothbrushes with bamboo or cornstarch products or changing acrylic scrubbers with eco-friendly ones. Even if you slowly expand your scope like this, quite a lot changes.”

The road to zero waste is not an easy one as it feels like going in the opposite direction from a fast and convenient lifestyle, the YouTuber added, but it is worth putting that much effort for the world in which the next generations can live longer.