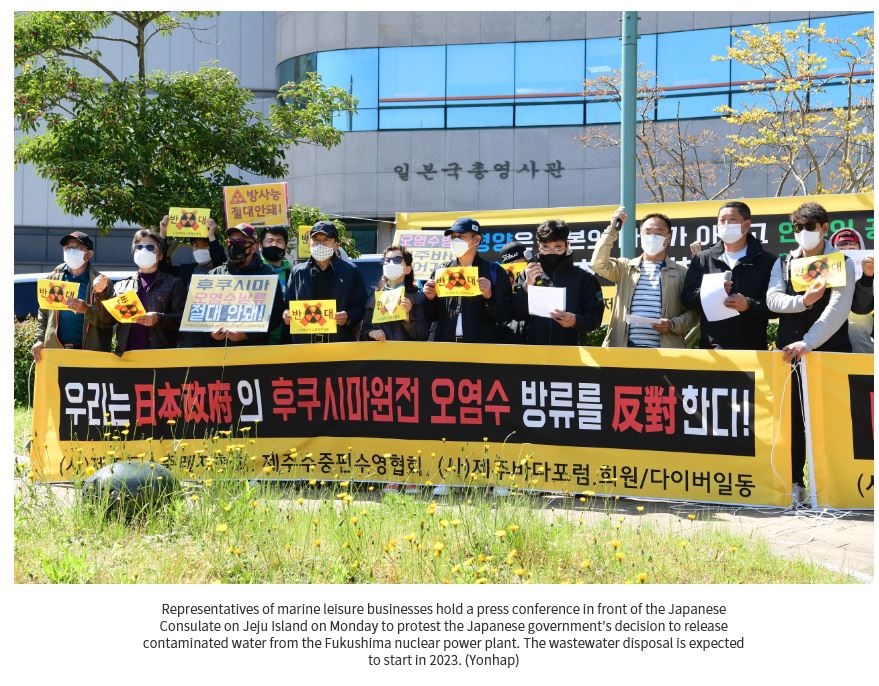 Following the Japanese government’s decision to release wastewater from its Fukushima nuclear power plant into the Pacific Ocean, South Korea is concerned of the potential harm it will bring when the radioactive water reaches local seas.

But concern is especially high for Jeju Island, the first province in Korea that would be affected by the contaminated water once it is gradually released from 2023 onward.

Experts have warned in their research reports that the radioactive water would reach the sea off Jeju Island and the East Sea as early as 200 days and 280 days after Japan starts emptying the tanks.

Jeju residents are afraid the radioactive water will effectively serve as a death sentence to the island’s fisheries and tourism sectors, the two pillars of the island’s economy.

“We strongly condemn the Japanese government for its decision to release the wastewater into the ocean and threaten the livelihood of Jeju Island and its people,” a coalition of representative groups from the fisheries sector said in a press conference earlier this month.

“It is clear that the release will be detrimental to Jeju’s fisheries sector by inflicting direct damage to fisheries products and cutting off the demand for the products.”

According to the Jeju Provincial Government, Jeju Island is home to around 9,100 fishing industry workers from 4,046 households. The province’s fisheries sector raised more than 1.3 trillion won ($1.2 billion) in sales last year.

As of last year, halibut from Jeju Island accounted for more than 60 percent - or 23,000 metric tons - of the total supplied throughout South Korea.

“If not fishing, I don’t know what else I would be able to do to put food on the table,” a fishing boat owner in Seogwipo, Jeju Island, said over the phone Tuesday.

“I spent the last 30 years on the boat, and this is basically the only thing I know how to do. If this radioactive water hits here, nobody would want fish from Jeju, even if the water itself turns out to be harmless as the Japanese government likes to argue. By then, I would be out of work.”

Even if Japanese authorities took measures to prevent the waters off Jeju from being contaminated, the fisherman said people would still avoid buying seafood from Jeju, which would “kill the market and the lives of thousands of fishermen on the island.”

The marine leisure sector has also raised concerns that the influx of wastewater would exterminate the demand for leisure activities, as nobody would want to get into the sea.

“There are around 140 registered scuba centers on Jeju Island, and when the wastewater hits our shores, all of the instructors associated with these centers will be out of jobs,” Choi Won-jin, president of the Jeju Association of Underwater Leisure, said via phone.

“The issue might not hit as close to home for people on the mainland, but it is directly linked to our livelihoods. If the water is spoiled, nobody would want to go in, including us. I haven’t made any plans on what to do once this happens, and I shouldn’t have to.”

Choi said his organization and many other marine leisure associations have joined hands to stage rallies in front of the Japanese Consulate on Jeju Island every day since the announcement was made.

Representative groups from other sectors have also staged their own rallies to protest the decision, he said.

“As far as I’m concerned, nobody, I mean nobody, approves of this decision,” he added.

“When this radioactive water reaches Korea, damage will be shared by virtually everyone regardless of where they live. We are going to continue protesting the decision until it is withdrawn.”

The threat to marine leisure businesses also alludes that the problem could extend to the greater tourism industry on the island.

More than 100,000 people on Jeju Island were estimated to be involved in the island’s tourism sector last year, making more than 7 trillion won in profit, Jeju government data showed.

The island, nicknamed the “Hawaii of Korea,” is one of the highest-earning tourism spots in the country due to its unique landscape.

Uncertainty also looms for the future of the island’s key cultural traditions such as “haenyeo,” female divers of Jeju Island, who are recognized as a UNESCO intangible cultural heritage.

“What we understand so far is that the wastewater could reduce the demand for fisheries products from Jeju Island, and that could threaten the continuity of the haenyeo culture here,” said Lee Han-young, president of the Nonprofit Organization of Jeju Haenyeo Cultural Heritage Preservation.

“The culture has been able to stay alive as young people became interested in becoming hanyeo thanks to improved prices of fisheries products. But if that financial promise is broken, people will lose interest in choosing this profession and maintaining the heritage behind it.”